Revscene Was There: The BMW 2013 3 Series Comparison Drive Event

2013 3 Series Comparison - Discussion – Revscene’s own Akinari-kun was able to participate in BMW’s latest 2013 3 Series drive test event at Cypress, featuring the new F30 2013 328i xDrive and the 2013 335i xDrive. He frequently drives an LCI E90 323i when the Element is being used by his folks, so he is no stranger to BMW’s handling. With that being said, during a polisci lecture he was browsing through Facebook and he just happened to see BMW post info on their 2013 3 Series Comparison Drive event and he literally jumped at the opportunity. 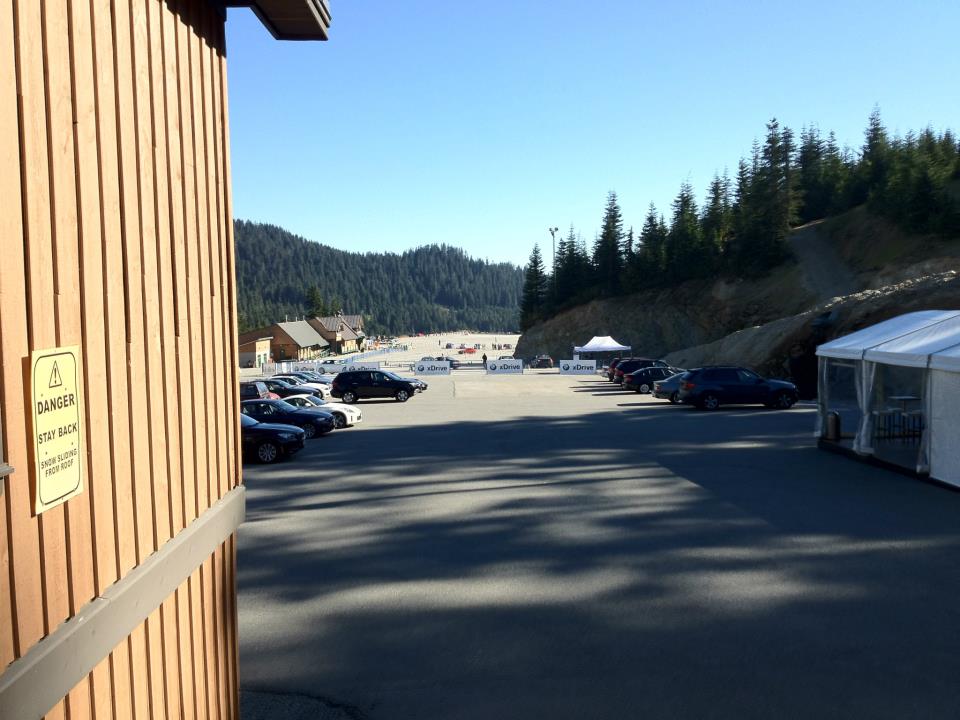 The event itself was held in the parking lot of Cypress, basically the entire area cordoned off and transformed into an auto-x track. Unfortunately I wasn’t able to take many photos. Too much excitement driving all those vehicles, however I will provide reviews for the driving aspect of all these vehicles, since ergonomics/appearance/interior styling is totally subjective. 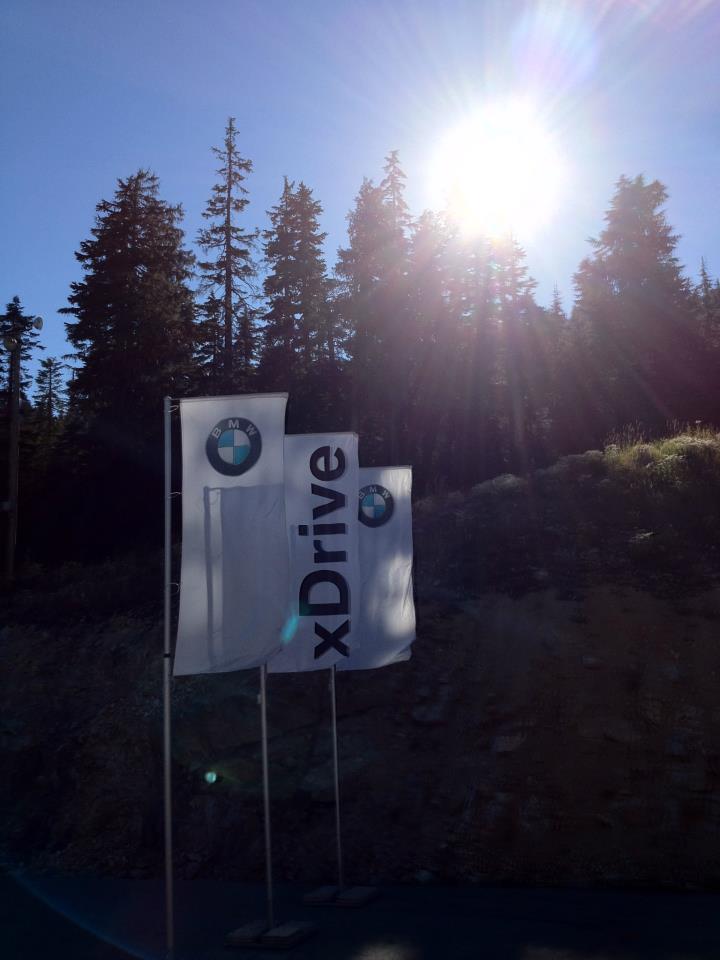 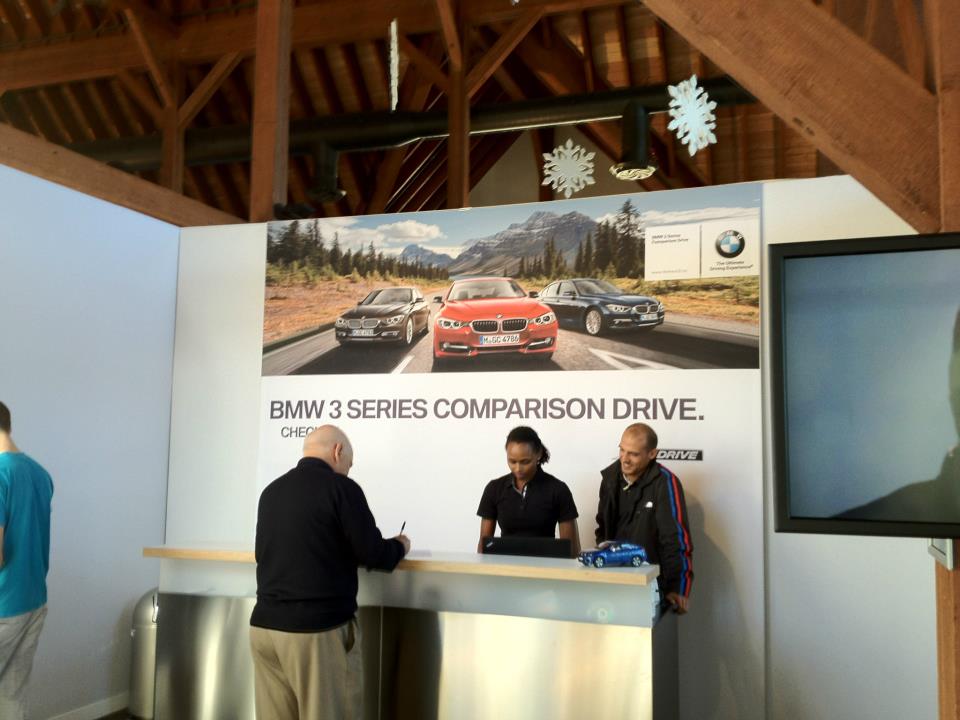 The first event featured the BMW 2013 328i xDrive, up against the Mercedes-Benz C300 4Matic and the Audi A4 2.0 TFSI Quattro. There was a short slalom section, as well as a skidpad-esque setup with sand on the turn to simulate loss of grip. 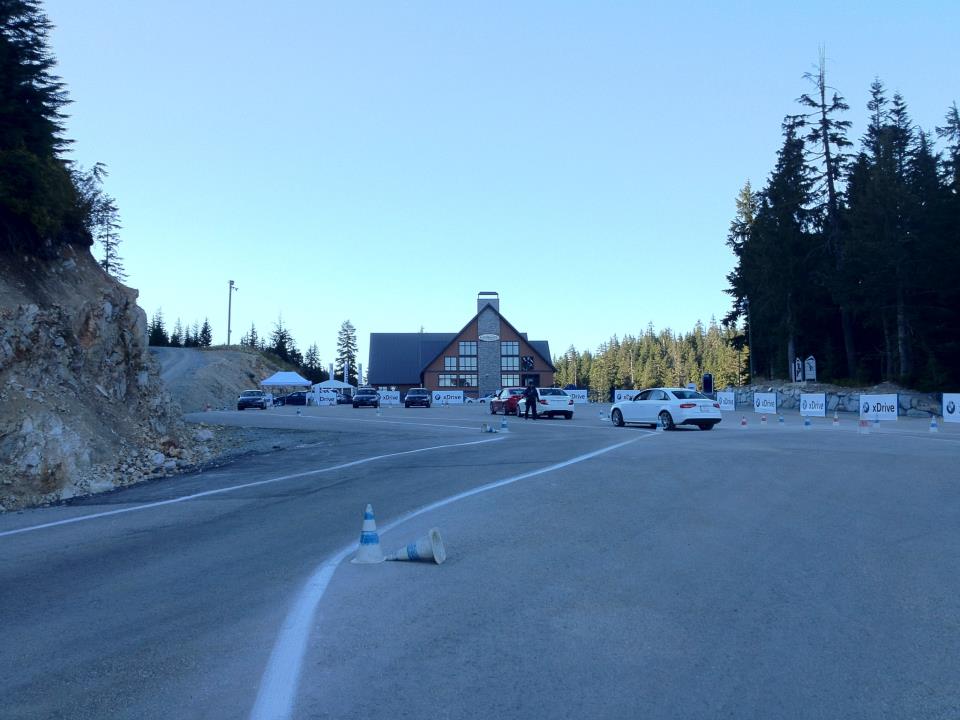 With 241hp and 258lb-ft of torque, this car was the speediest and most responsive of the bunch. There is seriously no indication at all that under the hood is only a 2.0L turbo 4-cyl engine. In fact, it was only after I returned home and went online to check the specs of the 328i that I realized it was a 4-cyl engine. Power delivery is linear without a single bit of turbo lag, with that 258lb-ft of torque available from just 1250rpm. The xDrive AWD system is also the best of the bunch, being able to transfer 100% of power to the front or rear wheels, and performed the best in the ice simulation, never once understeering. The car felt under control and quite tossable at all times, definitely a fun car to drive. My only complaint is the new F30 steering is ridiculously light compared to anything else I’ve ever driven, including the E90 steering.

Having the lowest power out of all three vehicles, the C300 certainly did not feel as slow as it should have. With that being said, Mercedes-Benz is definitely not known for their sportiness, and that was definitely reflected in the handling characteristics of the C300. The car felt significantly heavier than the 328i, and the ancient 4Matic system (with a 45/55 permanent split) was definitely ousted by the electronic xDrive system. One thing I must commend the C300 on however, is how stable and planted it felt through the corners, which I really attacked. Even though it felt much more loose in comparison to the rowdy 328i, it still felt surprisingly comfortable even when pushed to the limits.

Having a mechanical AWD system definitely feels different than BMW’s electronic xDrive. The handling characteristics of the A4 are superb, dare I say even better than the F30, but in a different way. The A4 stays firmly planted gripping the road at all times, which is very confidence assuring. Furthermore, I felt the steering feel was the best out of all three vehicles, the perfect blend of weight and smoothness. It did indeed feel heavier than the 328i as well, but the A4 certainly deserves to be put up against the new F30.

The second event featured the BMW 335i xDrive (with and without the M-Package), the Acura TL SH-AWD and the Infiniti G37x. The track was set up similarly to the first track, but with more space allowing for significantly quicker speeds to be achieved. 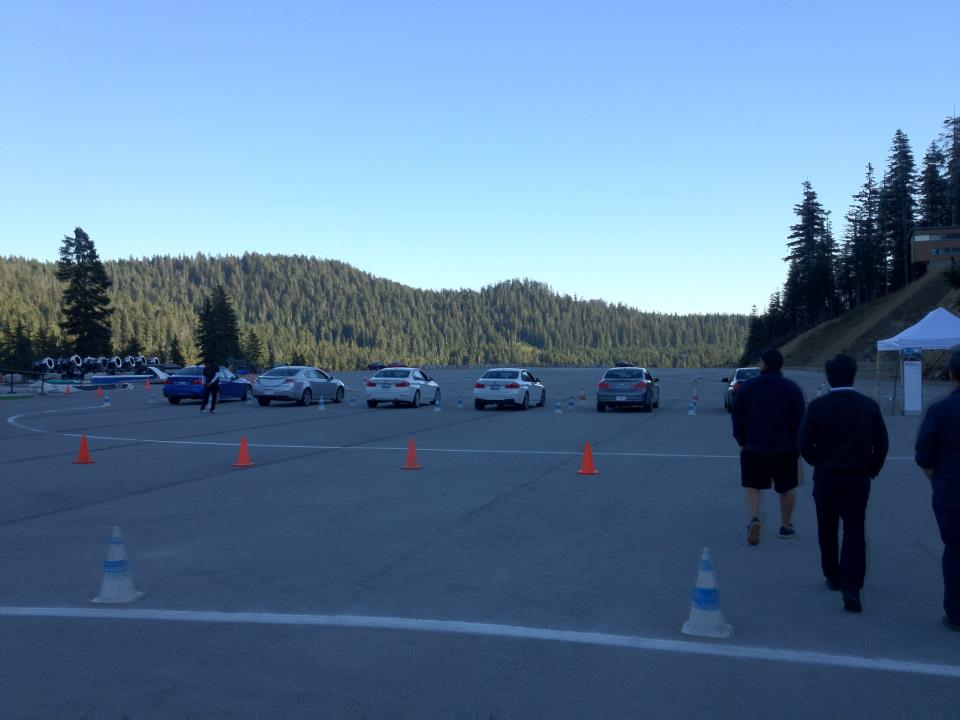 My god this thing is fast, and the M-Package springs/dampers allow the car to go through the slalom without even flinching. Flick the sport mode switch and put the transmission into sport mode, and it seriously is like a beast, a very refined one at that as well. The throttle response is out of this world, the brakes are superb, and the steering, though still a little too light for my tastes, is unbelievably direct. What I loved about this car was its tendency to slightly oversteer at the limit, which really proved to be rewarding since both the G37x and the TL, particularly the TL, understeered under high speed cornering. The car sounds great, has a superb transmission which shifts almost instantaneously, it handles great, it has superb chassis dynamics, it’s really an excellent vehicle that leaves nothing to be criticized.

I’ve always had a thing for the Acura TL, and though the styling is rather controversial, secretly I loved it, so I was definitely excited to be driving the top-of-the-line, “highly-acclaimed” AWD model. I must say, I was disappointed. In comparison to the G37x and the 335i, the suspension is much too soft, with the most stroke out of all three vehicles I’d say. The car felt unsafe through the slalom, and the braking response really wasn’t on par with the other two vehicles. At the final high speed corner, the car was understeering so much, front tires squealing and all, that I actually had to let off the pedal and brake a bit to avoid crushing a couple cones. The chassis had a much higher centre of gravity in comparison to the other two vehicles, and similar to how the C300 performed in the first test, the car is simply not meant for spirited driving the same way the G37x and the 335i are. Not only is the car too soft, everything feels strangely loose, definitely not a very confidence-aspiring feeling, so I’m rather disappointed. The transmission also blows as well, upshifting at the strangest times, making the overall experience very herky-jerky. The only really positive thing I can comment on is probably how much I loved the interior layout

Seeing the G37x out there all alone with its 17″ wheels and monster truck tires made me a little skeptical as to why BMW didn’t choose to bring in the S version, but nevertheless, the vehicle performed very well. In contrast to the TL, this vehicle actually had a rather direct steering feel, going through the slalom with ease, as well as the final high speed corner with only a bit of understeer. Overall, the car mimicked the feel of the 335i, being equally tossable, so in that sense I will say that Infiniti did a great job at nailing the handling characteristics of the G37 sedan. The transmission wasn’t on par with the 335i, but it was miles better than the TL, upshifting when you want it to. The VQ37 sounds great, but seriously lacks torque. This engine needs to be revved hard to get going when compared to the 335i. My only real complaint about the car is that the rear could be stiffened up a bit, but otherwise I wouldn’t mind driving this car.

All in all, I definitely had a great experience putting all of these cars to the test. I wish I brought my Go-Pro, as there were other drivers who did so, so all I can provide are images! 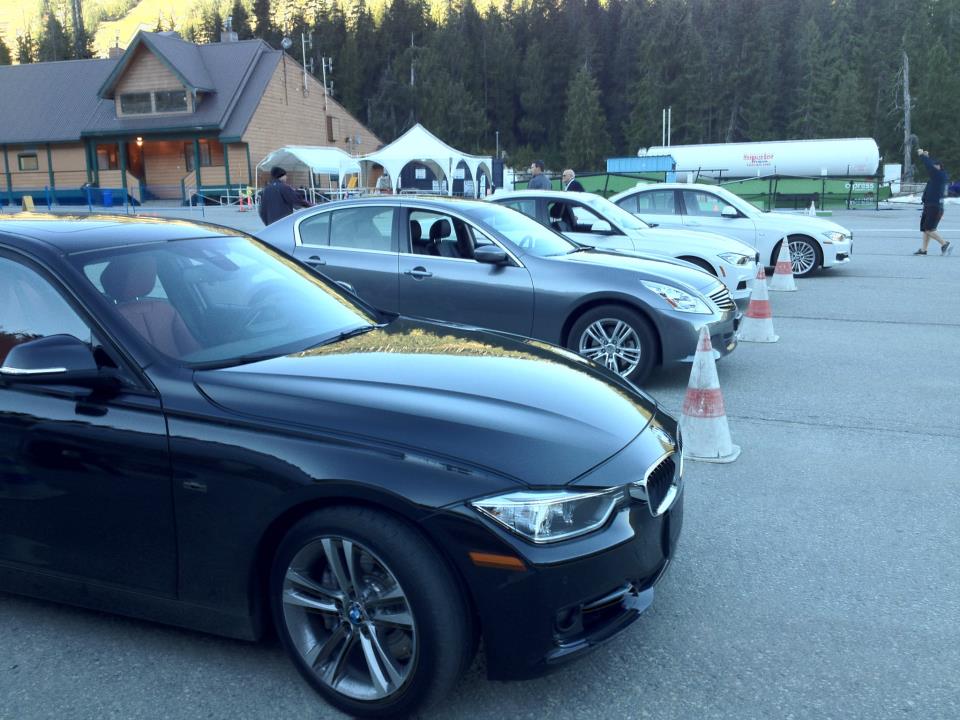 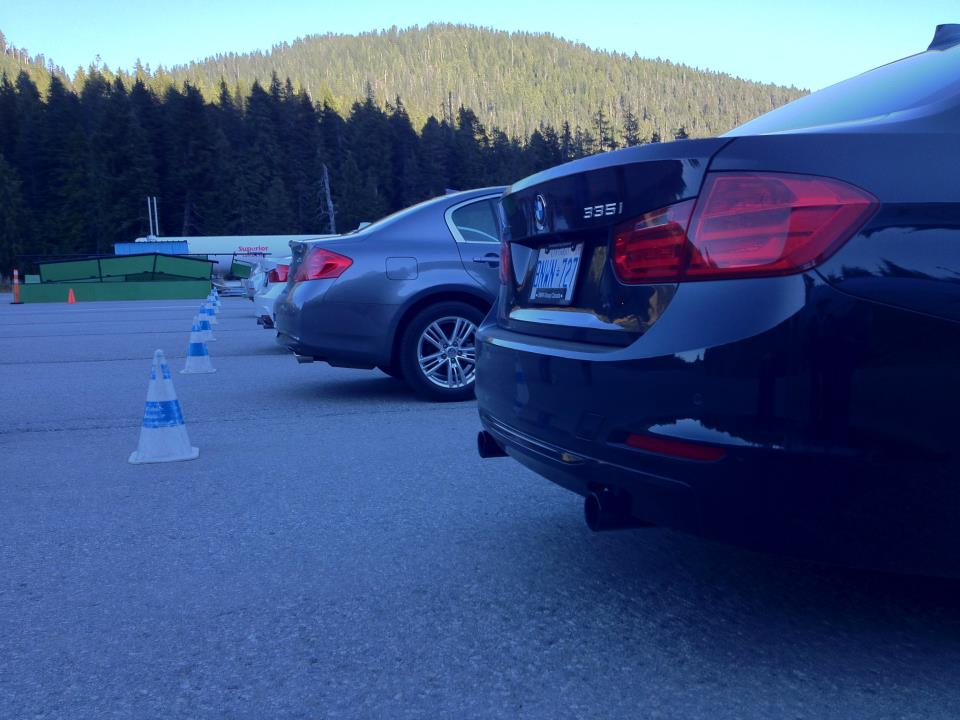 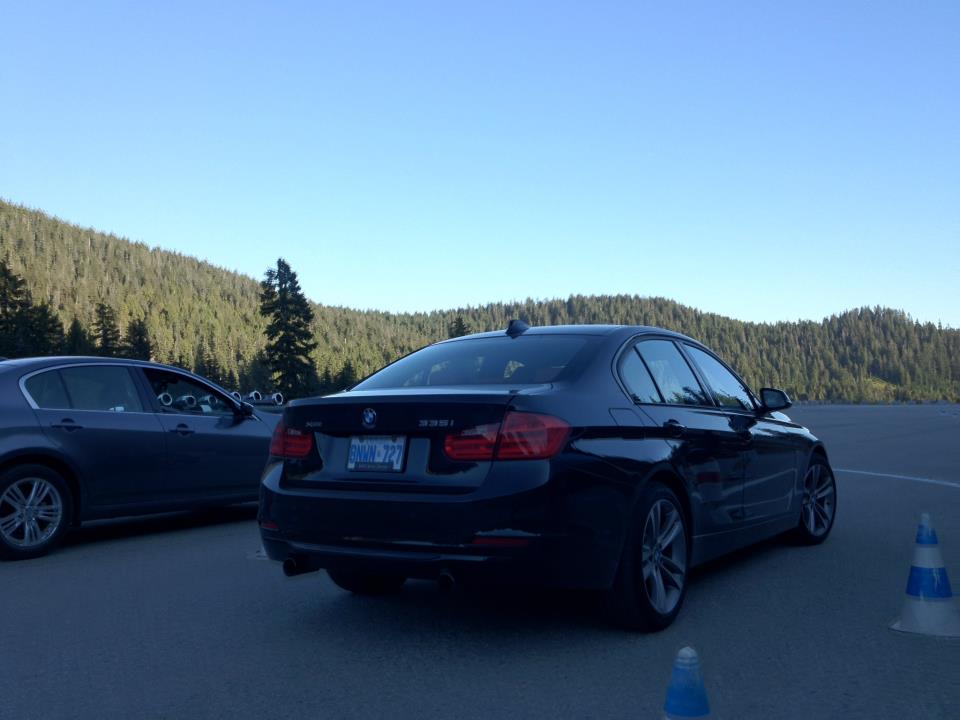 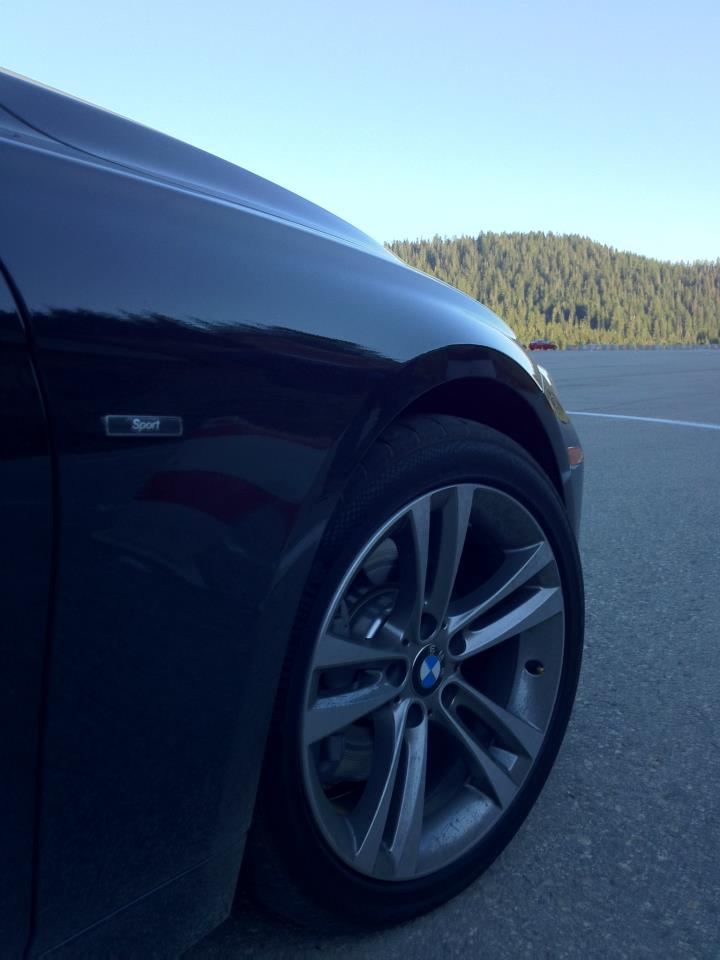 I’m not a BMW-fanboy in any sense, but damn they really nailed it with the 335i. I simply cannot describe in words how unbelievably great the car feels to drive, in all possible senses. If only I could somehow put the E90 steering feel onto the F30 then it would be simply perfect.

The discussion thread is here.